Who doesn’t love a good comeback story? We know we do and we are partial to this one so thought we would share.

This 18 hole course began as Sebastian Hills and opened in 2000. The course featured several large ponds, natural streams, rolling terrain and concrete cart paths throughout the entire course. It operated until its final season in 2017 and closed. It was listed for sale in 2018. During the listing period, it remained closed and was completely unmaintained in that timeframe with the exception of holes 13-15 which the neighbors of Curtis Lane kept up in hopes of an eventual reopening.

There were a few interested parties along the way but no deals finalized until late August of 2021. In stepped residents of the area with a dream and a vision for the property to reopen and come back even better! And so it began. Mowers showed up instantly from friends and neighbors and we got to work before the ink was dry on the closing statement.

So what did it look like when we got our hands on it? Well it was a mess. Here are a few pics that show what we were up against. 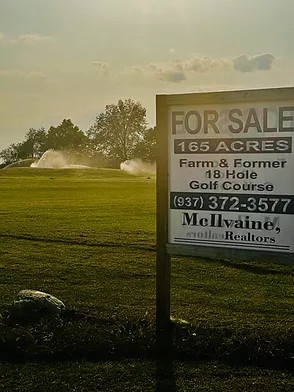 We bush hogged, mowed, chainsawed and blasted our way through the 4 years of overgrowth.

Then there was the irrigation. Was it even going to fire up? Were any lines busted? Can we even find the heads after 4 years? Well we got lucky. It all worked but one hole we had some minor issues with – we considered that a HUGE win. Its hard to grow anything if you don’t have water and we had water!

Once it was all knocked down and we knew we had water, we turned to focus on the greens. We experimented with 13 first. We tilled and seeded and weren’t 100% happy but wanted to try other greens to see if we could get it right. So we seeded them all. We still weren’t happy. So what did we do, we tried again. This time we are confident we have it right! They are coming in nicely and the weather absolutely cooperated. Below you’ll see the greens after they were stripped and their progress over the course of 8 weeks.

While the outside has buzzed along, we also started dreaming up what to do with the pavilion and clubhouse. We took advantage of the warm weather and painted the interior of the pavilion and cleaned it up. Strung some lights and it is in business! Check that off the list!

Next up was the clubhouse. We used rainy days to gut the interior for the most part. Then we had a blank slate to reimagine the old house that has so much history and character which we want to preserve. Below are a few pics that show what we walked into and some of the demo.

We also put a new roof on the clubhouse and the pavilion. It really helped to update both of those structures!

We have hired an architect and began the process of getting drawings for the renovated clubhouse.

As winter is just around the corner, our outdoor grass maintenance will slow. We still have some outdoor work to keep us busy such as removing dead trees and repairing drainage issues but we are mainly going to begin to focus on the inside.